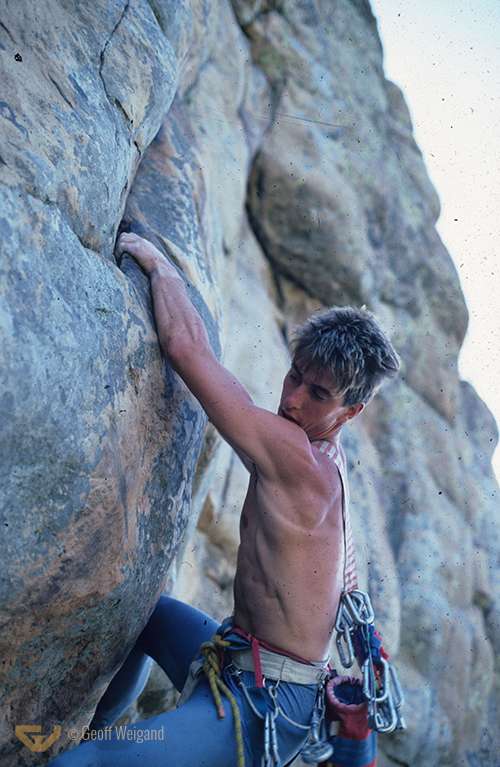 The ZeroGravity.Life Project’s origins lie in a life-long exploration of our ultimate human capabilities, initially through the lens of athletic performance, expanding the inquiry over the course of more than four decades to include what-it-is to live a (fully) integrated life.

Athletic Career:
Geoff’s early years were transformed by contact with nature through rock climbing and while still a teenager became one of the world’s original protagonists in transforming the pursuit of rock climbing into a world recognized athletic discipline.

He was in the first generation (and Australia’s first), of professional athlete rock climbers, where he traveled the world, completing world-level difficulty, Onsight, free-solo and first ascents on three continents – Australia, the United States and Europe.

By the age of 20 he had established himself as Australia’s and one of the worlds top rock climbers, while concurrently reaching “Cat 1” (A Grade) level as a road cyclist, with multiple road race, time trial and track race wins across multiple categories.

He also participated in rock climbing’s first foray as an Olympic discipline at the 1992 Albertville Olympic Games (demonstration event) where he was a finalist in the Difficulty-Speed event.

Concurrent with his athletic and later career, Geoff has maintained a (lifelong) commitment, supporting other performance minded individuals in finding their most integrated, capable and resilient selves.

He initiated his first “school of climbing” in his hometown of Sydney (at age 18) and was a guest university lecturer by age 20. Since then he has continued to develop and share his innovative understanding of technique acquisition, training and performance integration methods through formal training programs, workshops and seminars.

Geoff was one of the first in the world to develop and successfully implement sport specific neurophysiological, phased-based training, performance and recovery methods, which he applied to rock climbing, classic and other extreme sports disciplines. As a result of this he was highly sought after as a performance coach by his peers, and as a product design consultant for technical outdoor and nutrition supplement manufacturers.

Later, he authored and implemented the first integrated curriculum for teaching and training, climbing technique and performance for all levels of climbers, with programs originally designed for commercial climbing facilities and later adopted at the college level.

Over the next two decades he continued to develop the application of new performance integration methodologies, especially in the application of the minds role in performance, coaching world level, elite performers across a wide range of athletic and artistic disciplines including: Rock and Alpine Climbing, Road and Mountain Bike Racing, Swimming, and Classical Ballet.

He has also consulted a diverse group of career professionals: creatives, health practitioners, actors, pilots and chief executives in optimizing their performance.

More recently, Geoff has continued to expand the scope of (his) inquiry into human learning beyond a purely performance-based context: Moving into the realm of education, learning dynamics, the application of learning technology in education, as well as technology program development and implementation for government and education entities.

His latest work is expressed through the ZeroGravity.Life project – created to provide a forum for the exploration and application of wholly integrated (mind with body) ways of “living as learning”.

As the project founder he is also the principle creator of zero-G bio Acoustics human performance audio technology and related products, as well as Living Octave programs, seminars and community initiatives that address fundamental aspects of life: sleep “fitness”, personal resilience through Integrated Living and experiential learning for Integrated Performance.